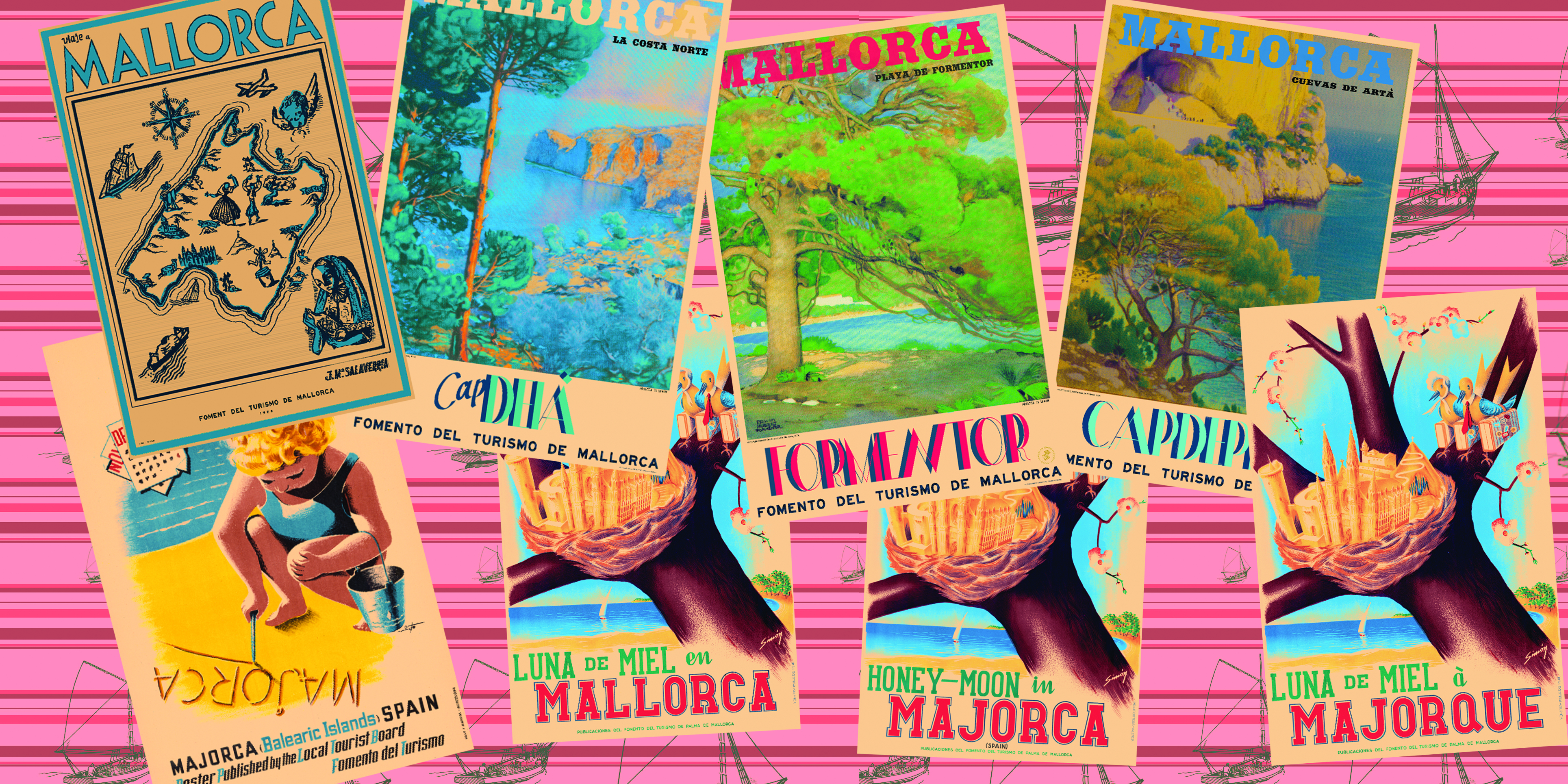 Palma de Mallorca, June 15th, 2021.  The Fomento del Turismo de Mallorca founded in 1905 and probably the world’s longest-established tourist board, is launching a series of early travel posters sourced from the Fomento’s own archive material.  Called the Mallorca Vintage® collection, it comprises of illustrative cartography featured in guidebooks produced from the 1920’s onwards, watercolours of the island’s landmarks painted in the 1930’s, and rare (first edition) posters created in the late 1940’s and 50’s. These artworks are testimony to Mallorca’s rich tourism history and its pioneering role at the advent of popular tourism in Europe in the 20th Century.

The collection has been made possible through a “lockdown-born” collaboration with leading licensed travel poster art specialists, Stick No Bills®, who made Mallorca their global headquarters in 2015, and have now curated, digitised, and remastered these rare artworks for exclusive publication from their European flagship gallery in Palma.

“We are enthralled by the unique artworks that we discovered in the Fomento’s archives and we feel privileged to have this exclusive license with which we can respectfully bring about their 21st century revival. Looking forward, we are already working on new additions to the initial Mallorca Vintage® collection with seasonal themes and atmosphere,” says Meg Gage Williams, Co-Founder of Stick No Bills®.

Comments the President of the Fomento del Turismo de Mallorca, Eduardo Gamero; “During lockdown we looked through our rich treasure trove of archive material and the early tourism posters that The Fomento had produced with well-known artists and illustrators over the decades from the 1930’s.  Stick No Bills® has painstakingly researched, catalogued, and refined this collection, to ensure its authenticity and quality producing these second-edition prints that bring our iconic images alive once more and accessible to all fans of the island”.

The inaugural nine images (available both as open and limited editions) showcase six of the Fomento’s most iconic posters, with three language variations – English, French and German – of one of its most successful campaigns entitled “Luna del Miel” (Honeymoon in Majorca).

Now lovers of Mallorca all over the world can order these prints in a variety of sizes from as little as 19.95€ (£17.25) for an A4 size open edition. Limited-edition prints start at 99€ (£85) for an A3 size plus postage and packing.  Prices are on application for bespoke editions. Free (tracked) delivery on all orders over 58€ (£50) at:

All Stick No Bills® prints are produced to the highest quality on responsibly harvested, acid-free, fade resistant artboard and 100% cotton-based archival fabric.  Proceeds from all sales of the licensed prints go to the vital humanitarian, conservation, and reforestation projects that Stick No Bills® sponsors, including The Red Cross, Foundation Save The Med and 8 Billiontrees.com., and the Gallery Climate Coalition’s initiatives to facilitate a greener and more sustainable art world.

This is undoubtedly the most iconic and successful travel poster produced by The Fomento del Turismo de Mallorca in its one hundred and sixteen year-long history.

The original lithograph was created by local artist, Simón Muñoz Lemaur, who entered a competition organised by the Fomento in 1949 and the image became part of a wider campaign to promote the island to honeymooners and couples in Spain and overseas in France, the UK and latterly in Germany.

The winning poster depicted the island as a romantic destination featuring the “husband and wife” lovebirds arriving on the branch of an almond tree with Mallorca’s architectural icons of Palma Cathedral (La Seu), Castell de Bellver, Basilica San Francesc, Cuevas De Arta, and the summit cross of San Salvador de Felanitx – all ingeniously illustrated within the “honeymoon” nest.

This campaign marked a turning point in the island’s history as tourism was regarded as a viable way for the island to grow economically.  The “Honeymoon in Majorca” poster was part of a “big push” to promote the destination nationally and overseas.  Not only was the campaign successful abroad, but also within the local community and this iconic poster was widely seen in hotel reception areas and shop windows around the island. The first edition print was published by The Fomento Del Turismo De Mallorca in 1950.

Mallorca was Hubert’s adopted home. He originally moved to Palma to become the secretary to the Archduke Louis Salvador of Austria prior to World War I. At the outbreak of war, he made his way back to Vienna and returned to the island in 1920 where he lived out his years, and through his paintings he served as a great ambassador for the island. His delightful watercolours, painted in the 1930’s, depict idyllic natural landscapes of the island and were acquired by the Fomento del Turismo de Mallorca to be used for posters, postcards and brochures for promotion throughout Europe.

Hubert’s paintings are said to have formed an image of Mallorca in the post-war world as an island paradise of great beauty, peace, and tranquillity. The first editions of each of these images were printed by The Fomento del Turismo de Mallorca circa. 1949.

This painting of the stunning Formentor beach in the far north of the island focuses on the pine tree forest that extends along the shoreline and the white shape of the iconic Hotel Formentor is in the background.

Cap Deià
Hubert painted the coastline known as the “Costa Nord” extensively and this watercolour typifies the beauty of that rugged seascape with a view across the wild Deià coastline that has inspired many artists over the years and continues to do so.

Historically, the caves were used as a pirate hideaway and in 1229 by the Moors fighting the troops of King Jaime I when they were famously smoked out of the caves.  In 1806 giant steps were built leading into the caves that were then opened for tourism. Hubert’s painting helped promote one of the island’s first natural tourist attractions.

Four colour lithograph by Jose Nieto, Valencia. First edition print published by the Fomento del Turismo de Mallorca, circa 1959. This charming image of a child writing “Majorca” in the sand was used in a campaign to establish the island’s as synonymous with family beach tourism   The last time it was featured by the Fomento was in a 1970’s campaign aimed at the British family market that coincided with the tourism boom on the island.

An Indian-ink penned map of the island featured on the cover of one of the early guidebooks, “Viaje a Mallorca”, that was first written in 1928 and updated and published by The Fomento Del Turismo De Mallorca, circa.1950’s.

All images have been remastered and relaunched by Stick No Bills® in collaboration with The Fomento del Turismo De Mallorca, 2021. For further details regarding their provenance and to order copies: https://sticknobillsonline.com/collections/mallorca-vintage-collection

The Fomento del Turismo de Mallorca (known as the Mallorca Tourist Board) was founded in 1905 and is the longest established tourist board in Spain and possibly in the world.  It was established with the objective of creating awareness of Mallorca as a destination and to study and implement how to promote the island to potential visitors. This institution, located in the centre of Palma, remains a private, independent, and non-profit making entity that is supported by members from throughout the island’s tourism sector. www.fomentmallorca.org

Stick No Bills® was established in 2011 by Philip James Baber, originally head of consumer advertising across all the FT Group’s Financial Magazines in London and subsequently a professional advertising photographer, and Meg Gage Williams, a former intelligence and security risk analyst. The British entrepreneurs founded Stick No Bills® with the objective of producing spectacular poster art and fine art prints thereof that are exclusively licensed and via which the international enterprise fund-raises for humanitarian and conservation projects underway within the iconic places championed in their designs. Their Europe-region flagship gallery is located throughout the ground floor of a 1920s town house on Costa d’en Brossa in Palma, twinned with their Asia-region flagship gallery which is spread through a 19th century Dutch merchant’s house on Pedlar’s Street in the tropical UNESCO Living Heritage City of Galle Fort, Sri Lanka, the company has cultivated strong island-wide reseller and global fulfilment networks in both territories, enabling them to sell their unframed and framed prints island-wide and to ship them worldwide www.sticknobillsonline.com