As one of the first Spanish destinations for package holidaymakers in the 1950’s, Mallorca has been at the forefront of tourism ever since. It remains the most popular short-haul destination for British holidaymakers (attracting approximately 2.8 million * UK visitors in 2019. Source:*AENA). The Mallorca Tourist Board (Fomento del Turismo de Mallorca) was founded in 1905 and is still the longest established tourist association in Spain, with a wealth of records and anecdotes. During the curfews we rummaged through our archives and found some great stories from the early days of tourism on Mallorca. 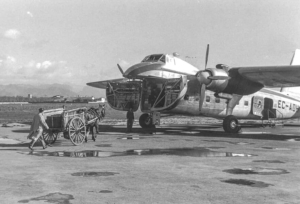 This photo was taken cerca 1954 when Palma’s Son Bonet Airport (now used for private jets and helicopters) was the island’s main airport. Using a horse and cart, passenger luggage could be transported from the hanger terminal and loaded onto the aircraft. In 1959, passenger operations moved to the existing Son Sant Juan Airport.

The very first English newspaper to be published in Spain was the Majorca Daily Bulletin in 1962. The founding director, Pedro Serra, wanted to communicate directly with English visitors and residents providing them with a combination of Spanish national and local news, culture and events together with breaking news from the UK. One of the paper’s first contributors was the late British poet and author, Robert Graves, who wrote “I Claudius” from his idyllic village house in Deiá.

Sensation! The first bikini seen in Spain in Mallorca!

Prior to 1962 nothing as daring as a bikini had ever been featured in a Spanish film let alone been seen in public. The “Bahia de Palma” film, which was shot all over the island ,featured the German actress, Elke Sommer, who posed in the infamous bikini on a Palma beach as a publicity stunt to promote the film. To the surprise of the film’s director, the Spanish Authorities did not oppose the censorship of the film even though women were prohibited from wearing two pieces in Spain at the time. The publicity stunt caused a sensation and the film was an international success.

In 1964 the Mallorca Tourist Board decided to celebrate its one millionth tourist visitor, who happened to be British. In conjunction with Palma Airport, they decided to contact the pilot of a British European Airways flight from Manchester to alert the crew and to ensure that the one millionth passengers (a couple from Manchester) would be greeted by a band, local dancers and dignitaries when the plane landed at Palma.

When the aircraft doors opened, instead of the designated couple, a typical English “lady” descended smiling and waving at the welcoming committee. The chief of the Tourist Board had the embarrassing task of telling her that this was not being laid on for her benefit but for the couple behind her. The “lady” replied; “Forgive my error, I thought all this was because I have written so much about the island. By the way, my name is Agatha Christie”. The Tourist Board chief couldn’t believe he had missed such a great promotional opportunity. The author first visited Mallorca in 1932 when she discovered the north of the island and loved Port Pollensa where she later returned. The area was also her inspiration for the murder mystery entitled “Problem at Pollensa Bay”.

Concorde lands for the first time in Mallorca

In 1983 to mark Concorde’s 31st anniversary of flying, British Airways organised a special “Concorde Mallorca” flight from Manchester Airport which took off on October 22nd, 1983 and landed at Palma to great celebration. However, in order for Concorde to break the sound barrier and achieve a speed of over mach 2, the aircraft had to make a detour over the Atlantic and then head towards Palma. For this reason the total flight time was two hours.

The Fomento’s Headquarters in the centre of Palma.

The Fomento del Turismo (known as the Mallorca Tourist Board) was founded in 1905 and is the longest established tourist board in Spain and possibly in the world.